A couple Sundays ago was my best friend’s birthday, and to surprise her, my boyfriend and I brought her favorite wine and made a gooey dessert: dirt. I remember first eating this deceptively named sweet in elementary school, so it was fun to try it again. I nabbed the most minimal recipe I could find off RecipeTips.com and made a few amendments of my own. 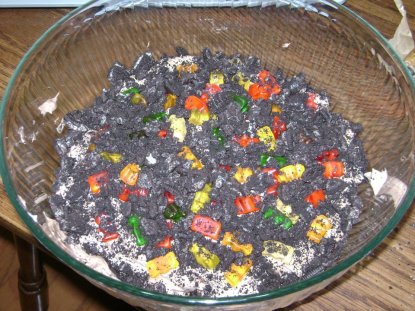 We started by putting the cookies into resealable plastic bags. If you can, divy up the cookies into two halves—so that 50% of the package is in each bag. Close tightly and use a rolling pin to crush until crumbly, not fine. Set those aside.

Make the chocolate instant pudding mix in a large bowl. Use a spoon to mix for however long the box says (about 2-3 minutes on average), then let sit for 5 minutes. I find that using a wooden spoon is a lot easier than a standard whisk, since the pudding sticks to the whisk more easily and is harder to scrape off. Now add all the Cool Whip on top of the pudding, sprinkling on top of that 1/2 of the crushed cookies (this is why having two bags with equal amounts comes in handy). Now stir it all together carefully until everything is well blended—the white Cool Whip should turn light brown from the Oreos, like mud!

Now here’s where I diverted from the recipe. Instead of using plastic cups to make individual servings, I transferred the ingredients into a bigger bowl by following these steps: Once you finish mixing the pudding-Cool Whip-Oreo fusion, sprinkle 1/3 of the remaining crushed cookies into the bottom of a separate, empty bowl. Now move the entire pudding mixture into that bowl, on top of the layer of Oreos. For the best presentation, go slowly and try to cover the entire area without getting any pudding on the sides.

Now add you gummy worms or bears—go ahead, drop them all in. I tried to get the most even distribution of colored bears (FYI, we used bears because my friend hates worms!). So carefully place those on top of everything in the bowl. Now sprinkle in the rest of the Oreos, so you evenly cover—or “bury,” if you will—the gummy worms/bears.

(As a note, Haribo gummy bears are my favorite, but they were too chewy for this dessert. Use regular gummy bears instead, if you’d rather have those than worms.)

I didn’t top with any Cool Whip, although the recipe says you can. Now cover the bowl with a lid or plastic wrap and put in the fridge. Serve chilled. Be warned, it’s very filling!

And there you go!