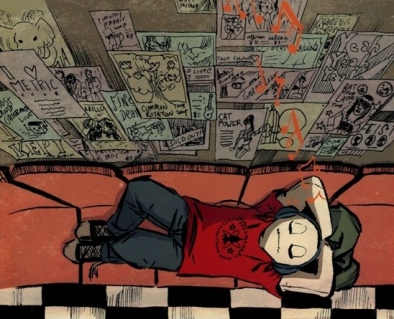 As some of you have probably guessed, I’m a big reader of books … and that includes comics! The good thing about comics is that not only are they a fantastic medium for prose and visual storytelling combined, but they’re also much easier to get into than you might think. There’s something for all tastes.

While we can’t always read the same books at the same time (read-alongs are a nice idea, but they’re up there with book clubs: not always practical), we can read the same comics on a regular basis. They’re not as much of a time sink. That’s why I wanted to reach out to my fellow lovers of comics and anyone who’s interested in learning more about them with this proposal: What are your favorite series currently on sale? Recommend them to me! And would you like my suggestions? Together we can expand our familiarity with genres and talented writers and artists.

Before you say no, keep in mind that you don’t have to understand decades of a comic’s history to enjoy it—and not every series has years to its name. New books are always coming out, and for the ones that have been on shelves longer, many writers make “cannon” a very accessible, non-scary word. Plus, you can now buy comics digitally as well as in print (if you can find a local comic shop).

I’d even be up for discussion! What do you say?

My first pick is THE LI’L DEPRESSED BOY from publisher Image Comics. “LDB,” as he’s called for short, isn’t so much a boy as he is a young adult who doesn’t fit in. The comic is an accurate depiction of the shyness and self-doubt that accompanies cases of depression. “What,” you say, “like the mental illness?” Yes! Comics deal with real life issues! Awesome, right? Even the fantastical can be grounded in the realistic … not that every comic is unrealistic.

Everything seems to go wrong for LDB when he’s at his lowest, and for anyone who’s ever been down, you know that when one bad thing happens, it seems like your whole world starts to fall apart. Although LDB might not always feel included, he’s surrounded by people who care about him—and a few people who don’t quite understand his needs, like his crush Jazmin, who seemed to reciprocate that affection until she revealed she had a boyfriend.

One of the major recurring themes in LI’L DEPRESSED BOY is music, which can be used to enhance any situation. Sometimes we see LDB listening and then leaving a crowd. Other times music is a source of empowerment and positivity. The language of music is very personal, especially for LDB, and a good many of us are familiar with the contrasting effects music can have on mood.

For me, the most singular aspect about LDB is that he is literally a blank slate—a doll figure without any remarkable features. For a depressed character like LDB, that self-reflective attribute is spot-on. Credit to artist Sina Grace for making it so visually convincing.

What do you think? Have you read LI’L DEPRESSED BOY before? Would you like to? Let me know in the comments whether you’re interested in more of these features and if you’d like to join the conversation. Feel free to hop over to the digital service ComiXology to make a purchase.

6 thoughts on “A call for comics! April’s pick of the month”