His arms were outflung and his mouth was a wide, lipless—no, his mouth was closed, it was his throat that gaped in a ragged, cheerless grin. 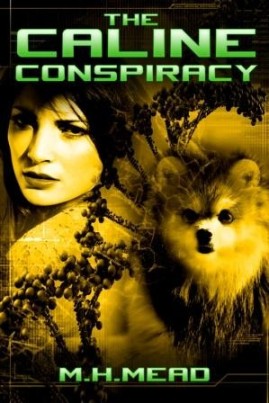 Last week Margaret Yang and Harry R. Campion, who write together as M. H. Mead, got in touch and offered me a review copy of their latest book. By the sounds of it, The Caline Conspiracy wasn’t something I’d normally pick up, and the cover screamed the nineties, but I agreed to give the book a shot. Sometimes we need to step out of our comfort zones.

As silly as the plot felt at times—it’s a murder mystery in which a genetically enhanced pet (a “caline”) is the only suspect—the writing was, well, good. Nothing ground-breaking, but better than a lot of the books I’m handed to read on assignment. I didn’t have to parse the prose to discover the kernel of worth within it. The Caline Conspiracy is written by two clearly talented people.

Of course, M. H. Mead might be writing about the perfect pets (and the not-so-perfect pets), but that doesn’t mean their book is flawless. The writers brush on a futuristic gloss at will, rather than building a believable sci-fi world from the ground up. You can’t have your character make tea or order pizza and then have her use some sort of holo-vid system without making readers wonder if maybe the science fiction part wasn’t a high priority after all. If you’re going to set your story in the future, you have to simulate the future down to the very last detail. Or at least have a robot ringing the doorbell with a steaming pie.

The story held my interest regardless of its slips, but I have to wonder about the scene with Aidra, Edo, and the perficats. The grand realization that occurs then doesn’t seem to have much purpose overall, other than to maybe foreshadow how crazy meddlesome scientists are with things that shouldn’t be meddled in.

I’m not sure I entirely believe a few other plot threads, either: Aidra’s totally lax, “cool mom” treatment of her son had me cringing; and the explanation for their new family member at the end was surprising but not entirely convincing.The backstory about their old dog Nutmeg gave the characters and story some valuable context, but it was never explored as much as I would have liked. A few minor characters could have used more attention after their biggest scenes—like Quinn’s unexpected trip to the hospital and Freddy and his wife. These characters deserve more than a passing role.

These failings in plot aren’t as extreme as they might sound—the only parts I was rolling my eyes at were the one near sex scene that didn’t belong and the aforementioned introduction of Aidra’s son Jon. I can’t recommend The Caline Conspiracy to everyone, but if you like the suspense of mysteries or you’re just a huge animal enthusiast, then you’ll likely find enjoyment in its story.

Thanks to the authors for reaching out and providing a review copy!