OK, this one took me forever to read, and not because it’s shy of 1000 pages. Life happens.

Since this is a sequel, I’m going to discuss A Clash of Kings a little differently, so yes — SPOILERS will abound.

Click through for the review, or read my thoughts on A Game of Thrones.

“Is your sword sharp, Jon Snow?”

It was not dead, just broken. Like me, he thought. I’m not dead either. 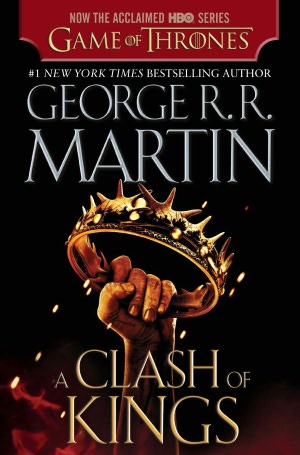 1. The comet — Authors commonly make use of symbols, but less often do the characters recognize them. I loved how everyone viewed the comet’s passing differently, as a warning or sign of birthright.

2. Gods — So we have the new gods and the old, and now we have one God, too. By introducing another religion, Martin shows how people’s faith can change as easily as their allegiances in politics and war, just like the title of “ser” or “lord” can mean little at all. This is also a great way to deepen the great transition affecting Westeros and the lands across the sea, most notably involving the unrest over kingship and the return of dragons.

3. Arya — The power that’s put in Arya’s hands to choose which three people shall die had me hanging on every word, but I’m disappointed she didn’t pick anyone more powerful — like Joffrey or Cersei. I guess that would be a cop-out on Martin’s behalf, and Arya’s still too young to think outside her own pain, so it works. Anyway, the coin she was given might indicate that she’ll get a second chance at playing with death later on.

4. Sansa — It was obvious that since most people hated Sansa in the last book, we were going to grow to like her. She’s still a little dull, but whenever a character goes through a tremendous amount of suffering, they tend to redeem themselves in our eyes. Sansa is one such case, but what’s most interesting to me is how her fantasy of being whisked away by a handsome, shining knight in armor has turned into a grimmer reality, where she’s saved by horribly disfigured false-knights like the Hound and the repulsive Ser Dontos. It’s a harder and twisted kind of fairy tale.

5. Bran — Okay, so the last line in the book practically reads, “Just in case you’re still wondering, yes, he’s alive…sucker!” I love Bran, and I’m glad he’s still around. Martin had me going, though. Given his reputation for killing off favorite characters, I completely bought that he’d do away with Bran and Rickon without so much as a closing chapter from their perspective. I teared up a little at the end.

6. Tyrion — He’s a much more likeable character to me now that he’s not cracking jokes about dying in bed with a maiden’s lips around his manhood. It’s also going to be interesting to see what happens with Shae, a whore he’s undeniably and fatefully in love with, just like before.

7. Theon and the spirit of the direwolves of House Stark — I loved that Theon’s guilt essentially drove him mad, and the Stark children and their direwolves haunted him in the same way they bring the children together positively through dreams. I feel like Arya, Bran, Jon, and even Robb — the wronged children of Eddard and Catelyn Stark — are going to avenge their parents and start a new era in the Seven Kingdoms. Very cool.

1. What happened to the comet? Martin spent so much time acknowledging it in the first half of the book, and then everyone seemed to forget about it. Is it gone now?

2. The events of the first half of the book passed much too slowly for me, even though I liked little things here and there. The second half proved the better and showed me why A Song of Ice and Fire is such a hit series.

3. As much as I adored this book, Martin neglected a few characters: Robb, for a good portion, and Daenaerys, who made too little progress overall for my liking. The Kingslayer’s capture is at a standstill, too.

What did you think of A Clash of Kings? Do you agree/disagree with my points, and why? Please refrain from posting spoilers post-book two in the comments. Thank you! :)

4 thoughts on “A crown for everyone: a review of A Clash of Kings”