Though a child of man knows time, life itself is eternal. 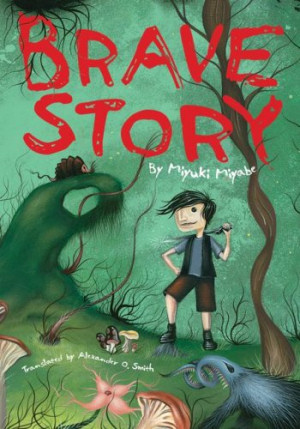 The tale of Brave Story comes packaged in a gorgeously illustrated, colorful jacket that hints at the adventure awaiting readers courageous enough to delve into the book’s 800-plus pages (if that’s even a concern for you). It’s a meaty story, written by female Japanese author Miyuki Miyabe and translated by Alexander O. Smith. In ways, it reminds me of The Neverending Story (one of my favorite books), but I think it’s much more rich and real than that.

Brave Story is a ghost legend, fantasy epic, and heartbreaking family drama all in one. Part One deals with a typical Japanese haunting and — who would have guessed? — video games since the main character, Waturu, and his best friend Katchan are kids. Then it veers off into much harder-hitting territory than the simple fun and worries of childhood: divorce, a difficult betrayal for any family.

Miyabe deals with this topic extraordinarily well. She doesn’t pick sides but rather gives the perspectives of Wataru and his abandoned mother and also his father, who’s leaving them, and his mistress. The story painfully and thoroughly explores how a change this devastating upends lives and ripples out, spreading a family’s secret shame to relatives, friends, and even the local community, with its people who are all too happy to judge.

Wataru, still so young, is left where all children are when divorce happens: in the middle.

His wish to bring his family back together takes him to a mysterious world called Vision, where he has a chance to change his destiny (Part Two). Wataru and Katchan’s past discussions of their favorite role-playing video games foreshadow the trials in Vision, but their ideas of what sword-and-shield adventuring is like doesn’t match the reality, as Wataru soon learns. Miyabe creates a fully embodied world here, set apart from the real world that Vision mirrors. Alongside Wataru, we come to learn about its cultures, history, people, and current events — including racial prejudices, crimes, religion, and war.

Fixing his problems in the real world won’t be easy. Wataru faces competition with his friend Mitsuru, a classmate and much more powerful and able Traveler to Vision. Both must collect five gemstones before they can reach the Tower of Destiny, where the Goddess waits to grant them their one wish and change their fates forever. Wataru embarks on a journey despite the doubts of an influential few and gains companionship in Meena and Kee Keema, who believe in him and the importance of his quest.

The difference between Mitsuru and Wataru becomes more apparent as they grow as characters, passing through different lands with a common fear among their people: the expanding conflict between the North and South and the approach of Halnera, an event that happens once every thousand years. Its coming signals much darker times in Vision, and it intensifies the rivalry between Mitsuru and Wataru.

Miyabe doesn’t resort to clichés of good and evil. The final and inevitable showdown between the two characters surprised me — it wasn’t how I expected their competition to end, and I like Miyabe’s creative decision here. The victor wasn’t necessarily “better” or more “good” than the other; rather, he understood the meaning of bravery and what his experience in Vision meant to his future.

Bottom line: I absolutely loved Brave Story. Smith’s Japanese-to-English translation breaches the cultural divide, so any reader, regardless of her country of origin, can enjoy the book and relate to its characters.

What I liked: Miyabe’s amazing storytelling and world-building — and the adventure.

What I wasn’t expecting: How honest and nonjudgmental the author’s depiction of divorce and extramarital affairs is.

3 thoughts on “Taking destiny into our own hands: a review of Brave Story”