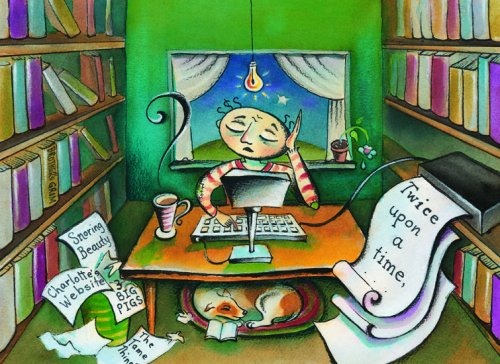 Tumblrs are a mixed bag. Some of them express an individual’s view of the world, others serve as a community for people who share a common interest, and a few are meant to simply insult the “idiots” of the Internet. Only it’s not in jest (“Look at this person’s grammar, har har”) but rather in cruelty (“Why don’t these people just kill themselves and get it over with”).

That’s why this article (quoted below) by Todd VanDerWerff of the A.V. Club annoys me. It’s about a Tumblr site dedicated to the “best” (ie., the worst) of NaNoWriMo, an event designed to encourage people to write — one of the most important but undervalued forms of communication.

Since it’s November, that means it’s time for half the Internet to try its hand at writing a novel, without much planning or forethought, to simply dump a 50,000-word first draft on the page by Nov. 30 and call it good. Rewriting? Who cares! In this grand age of self-publishing, the first draft is enough. Then you can call yourself a writer!

Look, National Novel Writing Month has noble aims, and trying to get people to get that first draft out is a great goal. (Lord knows the blank page is any writer’s worst enemy.) But the event also, unfortunately, encourages a certain sort of person, who might fancy him or herself a writer but isn’t necessarily certain of how to go about plotting or developing characters or researching or… anything, really. That’s why NaNoWriMo has forums, apparently, as those who need help turn to those forums to get questions answered by others.

Certainly there are people who want actual feedback and have difficult queries they want to wrestle with, but the Tumblr “Best Of NaNoWriMo” doesn’t care about those people. No, it is here to not-so-gently-mock the writers who essentially ask the forums to do their plotting for them, to answer the questions that are easily Googleable, to tell them how genius their terrible lines of dialogue are. The whole site is worth a read, but our favorites involve a donkey with a special power, this person who airily wonders if their book needs some conflict, and this one. There is also this helpful advice, for those of you hoping to make it to 50,000 words. Or, if nothing else, it is worth it to see the author squabble with NaNoWriMo participants, who think their hard work is being shat upon. (You can go ahead and use that construction in your novel. We do not mind.)

A few points need to be established here. First, yes — just because people get together and talk about writing doesn’t mean they’re writers. A writer is a continuous, active state of being; you have to keep doing it regardless of whether it’s fun or you feel inspired. The worst thing for writers in this age is probably the Internet, which is why we’re advised to turn our wireless connections off when we sit down to actually do work (unless you’re a web writer, but that’s a different story). Tweeting or browsing Facebook when you’re supposed to be writing is kind of like watching television when you’re trying to read a book — you’re not really doing it at all. One page just took you fifteen minutes. 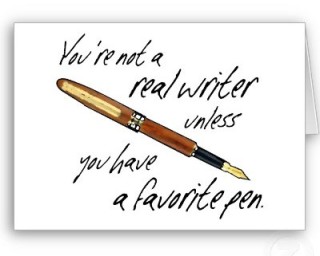 Second, writing a novel is usually a personal experience. It’s a way for one person to express his or her thoughts on the world. It’s not meant to be a collective of random people’s ideas not only because that would diminish the credibility and honesty of the book but also because people on the Internet don’t know what’s best for your novel. Reading other people’s opinions is a wonderful thing, and that’s what blogs like this one are for. But forums and comment sections on most sites? They’re host to petty arguments and misinformation from people who are closed-minded, not experts or people who want to take the time to brainstorm better ideas. Hence why the sort of Tumblr sites like the one above even exist. The point is, you should be doing the work for your novel, not looking to others for easy answers. Asking people to help create your novel’s foundation is not the same as participating in a writer’s workshop and requesting feedback, and even then the novelist must learn how to sort the good advice from the truly bad.

To me, allowing people to butt in during the creative process — when you’re writing that first draft — is suicide. You want your vision to remain intact, and seeking out others’ opinions is a sure way to ruin it. A novel is too vulnerable and impressionable to withstand judgement in its early phases without suffering for it. 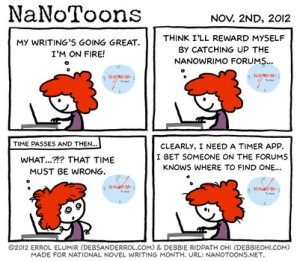 But I do take issue with this line: “Then you can call yourself a writer!” What’s the point in calling out other people for being “fake” writers? NaNoWriMo is about writing — not becoming a writer or author. Just writing. Because that’s what writers do. We write. All the time. We don’t go long without writing something or jotting down thoughts in notebooks, and usually at the most inconvenient times. I don’t believe any true writer takes pleasure in slapping a “writer” label around and holding it out of reach for others — at least not those of us with dignity, who know how hard writing is but also know that it’s worth doing and sharing.

Writing takes discipline. And just because you participate in NaNoWriMo, a marathon of sorts, doesn’t mean you understand that commitment or will even pick up a pen again until the same time next year. Author Tiffany Reisz wrote a guest blog post on Thanksgiving, explaining the reasons behind her seemingly snobbish tweet about real writers:

Last night prior to my minor breakdown, I tweeted, “When you’re on deadlines, every month is #NaNoWriMo. It loses some of its charm. #firstworldproblems.” I regretted tweeting immediately. It sounded as if I was complaining about people paying me to write books for them. What I meant by that tweet is that when you get a book deal and you’re contractually obligated to produce works of fiction, the concept of #NaNoWriMo becomes something of a moot point. Every month I have to produce around 50,000 words. It’s not a fun adventure. It’s a job.

She’s right: For writers who write for a living, as an occupation and not a hobby, NaNoWriMo is the reality — not a fun and exciting event. “I am a writer before anything else,” Reisz wrote, “and you can have my computer when you pry it out of my cold, dead hands.”

But she also understands something else — why writers, real or not, don’t have the right to determine whether other people are “real writers” or not: People pay us for our sentences, and that’s completely ludicrous. For that reason, we should always be humble, not self-entitled.

I’ve been seeing the demeaning attitude in the video games industry lately, too (over whether games writers are real “journalists” or not), and it’s absolutely driving me bonkers. Why? Because hard-news journalists don’t think games journalism even exists. Now games journalists are tearing down other games journalists. And this matters … why? What does this accomplish? The more people accuse others of not being real journalists, the more people are not going to do real journalism at all. They’re not even going to dabble. They’re going to embrace their hobbyist writing and ignore everything else because apparently we’re only allowed to wear one hat. But so what? Games journalism is a kind of entertainment writing, and entertainment writing is a very different beast. It has certain rules, and some of those rules make it an exception. But if the problem is that you want more “real” journalism in the games industry, then starting a witch hunt among your peers is not going to make it happen.

It’s the same here with aspiring novelists. Discouraging people from participating in NaNoWriMo because they can’t possibly have what it takes to be a real writer, to slave away every day like you do? Please. You were once an amateur. And if people told you to stop, that you weren’t a real writer, would you have listened? No? That’s goddamn right. Because writers write even when they’re surrounded by naysayers. They write because they can’t stop even though they think they’re terrible and the world hates them — because it does. It’s jealous of the faintest whiff of talent.

So I ask, what do we have to gain by tearing down NaNoWriMo writers or participants or whatever they want to call themselves? Nothing. What do we gain by letting them do what they want? Some stories that will maybe end up in the trash. Some novices running around without a leash. But maybe, just maybe, we’ll get books out of it. Wonderful writers will be discovered, and they might just make wonderful authors, too.