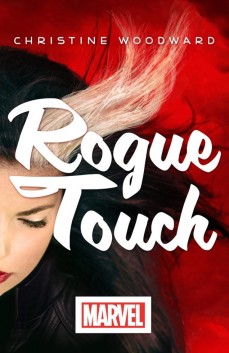 Rogue and She-Hulk fight hard to beat the bad guys and restore justice to the world, all while struggling for equal rights in the workplace. But now Marvel and Hyperion Books are shuffling them off to romance novels. They’re a real girl’s supergirls, but here, their fists and intelligence are better served for putting on makeup and picking out purses — that’s how we can teach young girls about empowerment, apparently.

The problem is, young girls are going read these books and identity “superheroine” with romantic success.

Now, maybe the writers on this new line of romance novels (Christine Woodward and Marta Acosta) won’t have the characters swooning like helpless damsels before men — because there are plenty of “hip” Marvel comics that deal with teenage relationships and gender roles that don’t turn the characters into complete brainless airheads — but I can easily see these turning out just awfully. In comic books, at least, the gigantic muscles and dramatic facial expressions tell you that these are powerful women, not to be messed with. They could toss a human man over the moon if they wanted to, for goodness sake.

I can’t help but feel like the focus on writing alone — and not any accompanying visuals — will translate these strong female characters into silly little girls. Can we trust these novels to “showcase strong, smart heroines seeking happiness and love while battling cosmic evil”?

“She-Hulk, Marvel’s much-beloved comic book heroine who shares her cousin Bruce Banner’s ability to transform into a hero of incredible power, comes to life in a page-turning novel,” the official synopsis reads. “In The She-Hulk Diaries, Jennifer Walters, aka She Hulk, juggles climbing the corporate ladder by day and battling villains and saving the world by night — all while trying to navigate the dating world to find a Mr. Right who might not mind a sometimes very big and green girlfriend.

“The second novel, Rogue Touch, features one of the most popular X-Men characters, Rogue, a young woman trying to navigate the challenges of everyday life and romance — except that her touch is deadly. After accidentally putting her first boyfriend in a coma, she runs away from home where, she meets the handsome and otherworldly James, and sparks fly. Like Rogue, however, James’ life is hardly simple. To elude his mysterious and dangerous family, James shaves his head, dons all black. Stealing a car, they head out on the highway, and eventually, Rogue has to decide whether she will unleash her devastating powers in order to save the only man alive who seems to truly understand her.”

Hyperion’s editor-in-chief, Elisabeth Dyssegaard, said, “Marvel has had tremendous success with recent hit movies, and we think it’s a great time to explore what happens to super heroines when they are dropped into traditional women’s novels.”

“Traditional women’s novels”? Why does that sound like they’re taking the “super” out of “superheroine” and instead focusing the characters’ strengths on their ability to secure a man?

Am I totally off the mark here, or are you equally as repulsed by the idea?

I did a quick search on Twitter to gauge the reactions, and not everyone is thrilled. One person tweeted, “There are women in the Marvel movies? (which is to say, they mostly feel tacked-on, or as primarily engaged in romance b-plots).”

Another asked, “Romance fans, would you read these?” Someone replied, “I would, depending on who writes them. All depends on the author and what they bring to the table.” And another user said, “I’d totally read Rogue Touch; with ‘superpower’ so inexorably linked with intimacy, it’d make intriguing romance.”

And: “Marvel super-heroine romance novels? Really? A great way to shake off that sexist image that the comic book industry has.”

How do you feel? I generally agree with these tweets — people have a tendency to force these ladies into insulting romance plots, and Marvel’s mental leap to this new demographic makes me cringe. At the same time, a good writer can make it work and not fall into sloppy clichés, but that might be a challenge to someone who hasn’t written these characters before.