Marta Acosta is frustrated. In our emails, she half-jokingly said that she was considering writing “I don’t write romance novels” at the top of her blog. I don’t blame her.

It’s an understatement to say the media overreacted to publishers Marvel and Hyperion’s announcement of a new line of prose novels, starting with The She-Hulk Diaries and Rogue Touch. They called it romance; it’s not. Others, like me, reacted to the overreaction and wondered whether this was the best way to portray these superheroines. The whole thing spun out of hand.

I wanted to share Marta’s story because she was caught in the middle. As a journalist, I want to stand up for those who have been treated unfairly or whose voice has been lost in a sea of others. As a blogger, I want to say that a lot of this was an honest misunderstanding — it’s hard to be a feminist (although it’s easy to be one in today’s world) and not overreact once in a while. But even mistakes like these can prompt discussion about bigger issues, like genre and the way we portray women in writing. Marta and I talked about the mishap from these angles and more.

Misprinted Pages: Marta, I’m mortified that the Internet has gotten She-Hulk so wrong. Fans fell for it; I fell for it. That’s why I feel so compelled to get the truth out there. Let’s start at the beginning, when Marvel and Hyperion had just made the announcement. What all happened that led to The She-Hulk Diaries and Rogue Touch getting mislabeled as romance novels?

Marta Acosta: Hi, Stephanie, and thanks for having me here to talk about my next book! My fantastic editor Elisabeth Dyssegaard made the announcement about the She-Hulk and Rogue novels. First off, it’s great to have an accomplished woman editor at the helm of these new Marvel projects. Some publications and some bloggers cherry-picked words either looking for a reaction or outrage. So “traditional women’s novels” was twisted as meaning novels in which a female character is weak and subjugated to men. All the positive points about the characters were ignored, and “romance” was presented as meaning a romance novel, which is a separate genre with its own genre conventions.

While I don’t write romance novels — defined as having a love interest as the central theme — I’m always a little stunned at the nasty disdain the genre receives. There are great and crappy novels in any genre you can name, including literary fiction, and I can’t help but think that romance is a target because it’s predominantly written by women for women and it celebrates their emotional life and sexuality.

MP: Do you think Marvel and Hyperion are at fault at all for inspiring the negative reactions?

MA: Not in the least. If anyone bothered to actually read the announcement, it’s clear that these novels try to present beloved comic book characters with a focus on the complexity of their identities. If that’s seen as demeaning to women, then demean away because characters who act without an internal life bore me to distraction.

MP: I’m still wondering what Hyperion might have meant by “traditional women’s roles,” which was a nasty trigger phrase for many people who were upset. What’s your view on it? Could it be taken positively? 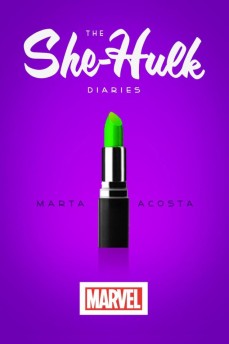 MP: What would have been a good way to market these books?

MA: I think the cover art, which got some reactions, is a great way to market these books. I love the funny, bright image of the green lipstick against the purple background. It’s eye-catching and instantly says, “This is a funny book about a different kind of woman.” It reads well online as a tiny image, and I can’t wait to see the actual books.

MP: A small part of the assumption that this was romance came from the cover.

MA: Humor is one of the hardest things to convey in cover art, and I think Hyperion did a fantastic job with the cover. I love the simple, clean graphic and the bold colors because I’m a bold colors sort of person. I painted my bedroom shocking pink and bright green, and the Husband always says it makes him feel like ordering a margarita.

MP: Let’s talk genres. She-Hulk isn’t a romance book. How would you describe it?

MA: I always say that I never colored neatly within lines. Personally, I don’t really fit in anywhere, and I think my writing reflects my cross-cultural, cross-social consciousness. Which sounds totally pretentious, and that’s part of my not fitting in. I like the way Danielle Binks, a reviewer at Alpha Reader, describes my writing: “She writes messy love, fucked-up characters, awkward situations, and scathing diatribes.”

MP: What exactly is the difference between romance, chick-lit, and young adult?

MA: The difference is whatever marketers tell you it is. Actually, romance has genre conventions, the primary ones being that a love relationship must be the central theme of the story and that it must end happily. You can find out more by going to the wonderful and hilarious Smart Bitches Trashy Novels website. Publishers often market non-romance books as romance because the genre sells so well.

Chick lit was generally considered a funny, lighthearted book by a woman. The success of a few of these novels caused publishers to flood the market copycats, both good and bad. The term became an insult. How much of that is sexism? A lot, I think. Women writers became terrified they’d be judged as silly and inconsequential if they were labeled chick lit.

MP: Why do these three genres get confused so often?

MA: Everyone has different motives. Publishers and booksellers are trying to market to niche audiences, which is a more effective strategy than marketing to general audiences. Critics are trying to show how discerning and very special they are. Authors are trying to find readers who actually understand what they’re doing.

MP: What has your experience been like, seeing this whole backlash unfold? How have you been dealing with it and the people involved? I know you emailed me about it, for one.

MA: Honestly? I thought, geez, can’t they bother to Google and find out who I am? I mean, I spend my entire life kvetching and writing about social inequalities and suddenly I’m the bad guy? It annoyed me to no end, but annoyed is my default setting, so that’s no surprise. At the same time, I really wanted to connect with the women out there speaking on behalf of feminism because it’s an important issue for me. I contacted a few bloggers/reporters and tried to clarify. I was delighted when you wrote back.

MP: Many who looked at your credentials following the announcement might not have gauged the quality of your writing. What’s your style like, and what do you hope to bring to The She-Hulk Diaries?

MA: I can write in a variety of styles, and I have great fun writing slightly delusional first-person narratives in a conversational tone. I’m influenced by the humor of Mark Twain, P.G. Wodehouse, Jane Austen, and Kurt Vonnegut, among others. I try to write tightly plotted stories with flawed characters who have mixed motivations and a level of unawareness. I often use humor to convey more serious themes.

In terms of The She-Hulk Diaries, I wanted to create a real person behind the superhero. The challenge was finding the humor in Jennifer Walters, Shulky’s human identity, when she’s both “painfully shy” and a highly accomplished attorney. I was inspired by a few shy friends who are successful attorneys — when they take on their legal roles, they show great courage.

MP: Do you think the media should be more responsible with this sort of thing?  Why do you think everyone ran with the words “romance” and “traditional” and had such extreme reactions to them?

MA: I think “romance” and “traditional” are terms historically used to demean women, so they set off reactions. The media likes reactions. Do I think it’s irresponsible for the Hollywood Reporter to claim that these books are inspired by Fifty Shades of Grey? Yes, but I also think it’s hilarious to make that up. I hold the media to higher standards on issues other than entertainment. If we were talking politics, I have a whole lot of issues with the state of journalism today.

MP: Adapting a character like She-Hulk to books is a big task; fans want to see it done right. How have you been preparing to write this character?

MA: When a character exists for 30 years, there are conflicting stories within her history. Sometimes I just picked one and went from there. I also read fans’ perceptions of the character — what they loved about her, what was important to them. Her humor, exuberance, and sexiness were always mentioned.

MP: Your trouble with mislabeling has gone on for a long time. What makes this sort of thing happens, and how does this affect your outlook and how your approach books moving forward?

MA: Part of the mislabeling is my own damn fault. I don’t want to write literary fiction for readers who will appreciate every precious reference to John Milton. I want to reach teenage girls who are sneaking novels into boring classes. I want to connect with other chicas who are figuring out bicultural lives and women who are imperfect but optimistic. I want to entertain snarky grandmas and also those guys who dare to pick up a book by a woman. This doesn’t mean I don’t have allusions to Milton in my books because I totally do. (Paradise Lost in the house!)

I think that I’m part of a transition. I don’t think I’ll ever be invited into the party, but I do think that perhaps I can open doors for others who follow me. I think that if I inspire a few others to follow, or change a preconception of what a Latina is supposed to be, I’ve succeeded.

Thanks so much for having me here, Stephanie, and letting me share my thoughts!