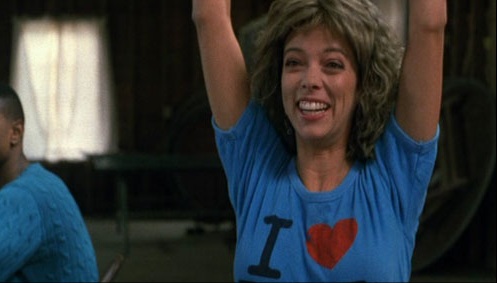 Halloween is one of my favorite holidays. So yesterday, my fiancée and I snuggled up together to celebrate with a good old-fashioned horror movie.

Too bad it sucked.

Granted, the first Sleepaway Camp was a great movie. Some kids attend a summer camp and wear ridiculously short shorts, and one of the campers starts offing people. Classic set-up. Sleepaway Camp III was free on Amazon Prime, so we thought, “Why not?”

Sleepaway Camp III follows the same premise as the first film, only the original killer, Angela Baker, has returned to do away with another generation of kids — half pretty rich teenagers from states like Ohio, half gang members and delinquents.

Angela ends up killing almost everyone in the movie, and it couldn’t be more dull. Even Angela sounds bored doing it. (“Just taking care of business.”)

The movie has no tension, the undercurrent of electricity that makes us care, worry for the characters, and squirm in anticipation. Which provides a pretty good lesson on why tension is important to any story.

Problem 1: Sleepaway Camp III is told from the killer’s point of view.

We follow Angela around everywhere, and we see everything she does. That doesn’t leave much to the imagination. She can’t pop up and scare us if she’s in every scene.

Nothing is unexpected. We know as soon as she gets someone alone what she’s planning. No surprises there.

Problem 2: Everybody else sits around.

Half the characters are “troublemakers,” but no one actually does anything. The black kid listens to rap music. The others fool around in the woods. Wow. Such behavior. Much rebelling. Aside from a fistfight fight early on, no one does much else than insult each other or make out.

Most importantly, no one makes Angela’s life harder in a way that actually counts. The kids tease her by lighting a firework in a fish. She retaliates by murdering them.

Angela’s already a known killer who detests swearing, drug taking, fornicating, and … laziness? So we know exactly as soon as someone makes her hit list. She has no secrets left for us to discover, no mystery to her actions or words, and her moods are totally transparent. She’s practically in cahoots with the audience.

Problem 4: No one notices anything.

The campers are separated into three groups, or Angela picks them off a couple at a time. Whenever someone walks by, they wonder, “Hey, where is what’s-his-face?” And Angela makes up a lie like, “Oh, she went back to the main camp,” or, “They went fishing.”

No one actually finds the corpses or sees Angela doing any wrong, so no one suspects her until she wants them to (at the end). There’s no urgency. They’re all so oblivious, she takes her sweet time.

Problem 5: Her only opposition is absent for half the movie.

The only character who stands a chance against Angela is a cop/counselor with a grudge against her. Conveniently, he doesn’t recognize her for most of the movie. When he finally figures it out, she shoots him.

How do you add tension to your stories? What’s another example of a movie, book, or show that does tension right?