Lisa Cron’s Story Genius is one of my favorite books on writing, and it packs so much invaluable, hard-hitting advice into the beginning that it’s worth reading for the first 40 pages alone.

Story is imperative to our biology 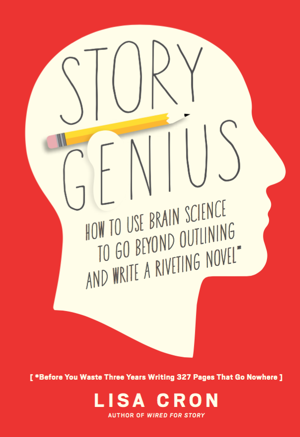 When it comes to story, we’re getting more than entertainment. We want to be engrossed because we’re asking ourselves, according to Cron, “What am I going to learn here that will help me not only survive, but prosper?”

Cron explains that humans evolved to work together, and storytelling plays a big role in doing that. “Don’t pet the lions” is an important message to communicate for our survival, but we need more help navigating the social world. “Sure, we can see what people do,” Cron writes, “but knowing why they’re doing it — which is what matters most — is elusive … That’s what we’re dying to know, and what we’re wired to respond to in every story we hear, especially novels.”

We don’t read to escape reality, Cron argues. We read in order to learn how to navigate it.

Story is not plot

Plot is what happens. Story is something bigger.

“A story is about how the things that happen affect someone in pursuit of a difficult goal, and how that person changes internally as a result,” Cron writes.

But, Cron argues, we’re learning the wrong understanding of story when we’re kids and our teachers give us prompts along the lines of, “What if Freddy woke up and discovered that there’s a castle in his backyard? He hears a strong sound coming from inside … and then … Write a story about what would happen next.”

What happens next isn’t the story; it’s the plot. Context — the meaning those events have for the protagonist — is what makes a story.

Good writing does not equal a good story

Cron says most of us mistakenly believe that the trick to writing a good story is to learn how to write well. So we study grammar and strive to emulate beautifully crafted sentences.

But that’s backward. We should be first learning how to tell a good story and worry about getting the writing right later.

“The conventions of writing — voice, structure, drama, plot, all of it — are the handmaidens of story, not the other way around,” Cron writes. “It’s the story that gives those beautiful words, those interesting characters and all that drama, their power.”

If all we wanted was beautiful prose, Fifty Shades of Grey wouldn’t be so popular.

‘Writing is like driving a car at night’ (pantsing) is bullshit

There’s an E. L. Doctorow quote that says, “Writing is like driving a car at night. You can only see as far as your headlights, but you can make the whole trip that way.”

That’s bullshit, according to Cron.

Most people aren’t natural storytellers. The best example I can think of here is Stephen King, who vehemently argues against plotting your novel — of instead “pantsing” your way through it, which has always struck me as terrible advice.

King is a natural storyteller, someone whose “cognitive unconscious has the innate knack of offering up prose in story form.” King might be able to sit down and starting writing a great story without knowing where it’s headed, “but when the rest of us follow suit, our stories almost always end up taking a meandering, disjointed, episodic route that often ends abruptly when we inadvertently drive off a dimly lit cliff.”

If you can move things around, your novel is in trouble

Rough drafts are supposed to be shitty, Hemingway said. And Cron agrees. She just has a problem with taking that too far — to, as author Anne Lamott says, “let it all pour out and then let it romp all over the place, knowing that no one is going to see it and that you can shape it later.”

Cron says that “chances are, after months of pantsing what you’ll see is a collection of events that don’t add up to anything — just a sprawling, aimless frolic. And trying to shape it only makes it worse, because there’s nothing to shape. … The very fact that you can move things around is a telltale sign that the novel has no internal logic.”

Yeah, Cron is a hardass. I kind of love her.

Plotters sometimes do it wrong, too

Plotting your novel is mostly right. But a lot of writers, Cron says, focus on plotting the wrong thing first: the external events rather than the internal story.

“Thus plotters begin by laying out the surface events of the story — beginning on page one — with little regard to the protagonist’s specific past, which is the very thing that determines not only what will happen in the plot, but how she sees her world, what she does, and most importantly, why.”

Or to put it more simply, “Outlining the plot first is like saying, ‘I’m going to write about the most difficult, life-altering series of events in the life of someone whom I know absolutely nothing about.”

The Hero’s Journey structure is misleading

External story structure models only contribute to the problem. Cron says “it’s deceptively easy to believe that all you have to do is ape the shape” — something big happens here, something dangerous there, instant gold — “and you’ve got a story.”

But story is more than a paint-by-numbers plot. The problem is, these models like The Hero’s Journey analyze finished works, not works in progress.

Writers follow these story models beat by beat, Cron says, and then wonder why their novel isn’t “nearly as engaging as all those novels, movies, and myths that the ‘story structure model’ was based on.”

In other words, you can’t create a good story from the outside in.

Be careful with ‘in medias res’

It’s good to start your story in medias res, meaning “in the middle of the thing” — as long as you understand that you still have to know the why.

Too many writers take in medias res to mean “plunge us into current action and explain it later,” Cron says. “… By leaving the ‘why’ out of the picture, the action often reads as a bunch of things that happen” — which we know is plot, not story.