These last few weeks in December are great for sorting through tons of books, comics, television shows, etc., that you missed throughout the year. And it’s almost 2013 now! Better hurry. We all have a lot to catch up on, and this is one title you don’t want to skip.

If you read my open call for comics back in April, then you know I’ll be spotlighting current comic book series (in addition to my graphic novel reviews) every month or so to inspire discussion. I’m also taking requests, so please — leave a comment or drop me an email.

I didn’t read the WITCH DOCTOR four-issue miniseries (plus the few extras that came out) when creators Brandon Seifert (writer, SPIRIT OF THE LAW, DOCTOR WHO, HELLRAISER) and Lukas Ketner released it last year. Actually, I had never even heard of it until the first issue of WITCH DOCTOR: MALPRACTICE hit last month. But I do know about the company behind it: Skybound Entertainment, an imprint of indie comics publisher Image, is owned by Robert Kirkman. He’s a pretty famous guy in the industry — known for creating THE WALKING DEAD, the zombie comic series that inspired the popular AMC TV show and some games. 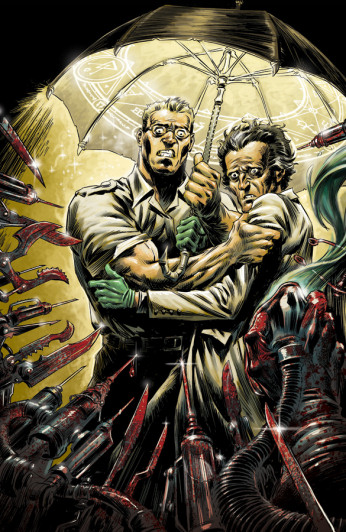 The name Skybound itself doesn’t guarantee quality, but give MALPRACTICE a shot and you’ll find it has a certain The Monstrumologist vibe that’s irresistible. I can only imagine that Dr. Vincent Morrow’s (the eccentric occult physician and lead character in the comic) laboratory and all the gruesome experiments that go on there are as ghastly as they would appear in Yancey’s young adult book if it were a graphic novel.

END_OF_DOCUMENT_TOKEN_TO_BE_REPLACED

The waves are high and the sunset’s red. So now it’s time to go to bed.

The tide is up and the wind does rip. But worry not, ’cause we’ll never tip.

We’fe far at sea, days from land. But if you’re scared just take my hand.

Just hold on tight, boy-o-mine. In my arms you’ll be just fine.

The moon is full, the sea is deep.

Jeff Lemire has become one of the most popular comics creators in recent years, working with DC Comics to write and illustrate titles like SWEET TOOTH and the new ANIMAL MAN. This year’s The Underwater Welder (from Top Shelf Productions) is a graphic novel entirely of his own invention, and Lemire’s keen moral sense of character and thorough understanding of happiness and sorrow, and of success and failure, translate wonderfully into this standalone tale.

Lemire has a knack for balancing simplicity and complexity with equal grace. Divided into four parts, The Underwater Welder is about a man named Jack who’s about to start a family with his wife Susan, but before he can move forward, he must come to terms with the past. He dives deep into the cold, dark sea every day not in search of riches or sunken treasure but answers. Years ago, when Jack was still a child, his father jumped into the ocean and never returned, leaving him and his mother alone.

Now, as he’s on the verge of becoming a father to a baby boy, Jack’s fears and doubts bubble to the surface. Was his dad really the hero that he idolizes, or has he been ignoring his loved ones’ advice and forgetting about countless disappointments? Susan is worried that Jack will turn into his no-good father at a time when she needs him most, and he almost disappears altogether — just like his dad did. To shoulder the responsibility of parenthood, Jack must understand his father not as a child does, but as an adult can. Fathers are human beings, with real moments of strength and weakness, and Jack must figure out what kind of man his was. But there’s a possibility that he’s searching for a truth he’ll never find.

END_OF_DOCUMENT_TOKEN_TO_BE_REPLACED 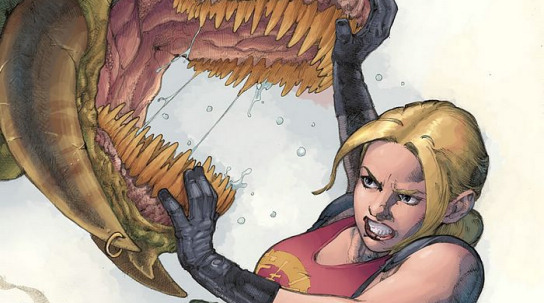 I recently picked up the first volume of the Dark Horse Comics series Buffy the Vampire Slayer at Half-Price Books. :)

END_OF_DOCUMENT_TOKEN_TO_BE_REPLACED 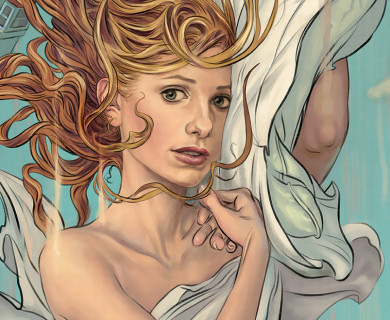 If you read my open call for comics back in April, then you know I’ll be spotlighting current comic book series (in addition to my graphic novel reviews) every month or so to inspire discussion. I’m also taking requests, so please — leave a comment or drop me an email!

Check out last month’s review of HE-MAN AND THE MASTERS OF THE UNIVERSE #1.

A lot of you are probably fans of Joss Whedon. From The Avengers to Firefly, he rules a modest corner of the geek world. You’re also probably familiar with Buffy the Vampire Slayer, but have you seen past season seven? If not, then you’re missing out on plenty of new stories that await beyond the television screen and on the pages of Dark Horse Comics. Their Buffy adaptation is no small secret in the Whedonverse.

BUFFY THE VAMPIRE SLAYER SEASON 8, as it’s called, was an extended run of the comics that lasted for 40 issues over four years. There were Angel and Spike books over at IDW Publishing, but now everyone’s favorite puppy-eyed and peroxide-headed vampires have relocated to Dark Horse, the home sweet home for all things Buffy in the shows’ afterlives. Faith is there, too — and even Drusilla and Harmony.

The latest run, SEASON 9, is already 12 issues deep, and can I just say … I love this cover!

Andrew Chambliss writes the return of Wolfram and Hart, the evil corporation that Angel toiled in Los Angeles to stop. Since Buffy broke the Seed, emptying the magic from the world, the demon-serving lawyers should be shut away in their own pocket of hell. But now that Buffy’s a Slayer-slash-bodyguard for the rich and powerful, she has an inside scoop on the business world — and one Internet billionaire is telling her the opposite. Wolfram and Hart wants him dead.

It’s cyber terrorism on a whole new level — well, dimension. To seal away Wolfram and Hart for good, Buffy and company must battle a Teuth demon and find which of startup Tincan’s servers to fry. But keeping the connection open could mean a last link to restoring Earth’s magic … or to righting wrongs with Buffy’s friends, including Kennedy and Willow.

Michelle Madsen provides colors, and Georges Jeanty (who designed the cover above) is on pencils. The combination is an artistic style that’s become iconic to the BUFFY series. But what’s best about this series is how believably the creators translate real-life actors in the television medium to cartoon figures in print, and how they turn near hour-long stories across 24-episode seasons into serial, bite-sized issues released across a much longer span of time. If you haven’t started reading these, now’s the time to get on board. You won’t be disappointed.

If you read my open call for comics back in April, then you know I’ll be spotlighting current comic book series (in addition to my graphic novel reviews) every month or so to inspire discussion. I’m also taking requests, so please — leave a comment or drop me an email!

The ’80s are still alive, baby! New to DC Comics, HE-MAN AND THE MASTERS OF THE UNIVERSE #1 is a blast from your childhood past.

Imagine my surprise when I opened my mail and found a radiantly glowing HE-MAN comic book hiding in my pile of new issues. And by writer James Robinson, no less! Do you know who that is? He’s only one of the coolest writers ever — he modernized STARMAN and turned it into one of my favorite long-running series. So good.

Aside from the gorgeous cover by Philip Tan and Dave Wilkins (a great eye-catcher), the first issue brings back the classic cartoon in style. Look past the first page, which poses He-Man in an awkward running stance, and you’ll fall in love with Philip Tan’s art and Richard and Tanya Horie’s and Carrie Strachan’s colors (on their respective pages).

He-Man won’t be shouting “I have the power!” anytime soon — at least not in this issue. Adam is a woodsman, “and that is all.” He dreams of swords and beasts and heroes, but when he wakes he’s back in the forest, chopping wood and caring for his senile father, who thinks he lives in a royal palace. Whatever reality has become for Adam and those around him, it’s not the stuff of legend. Robinson has given the comic a kind of FABLES vibe.

But the world is trying to make him remember. First a blue and orange falcon — Zoar. Then a monster that confronts him as soon as he leaves his home. His axe becomes a weapon; the woods his battle ground.

It might be different, but the comic still feels like the classic tale. The scene at the end, where Skeletor says “Adam must be stopped, and quickly!” is reminiscent of the cheesy kids’ cartoon. Robinson’s HE-MAN feels like a bridge between two eras … and I hope it’s here to stay for more than just six issues.

HE-MAN AND THE MASTERS OF THE UNIVERSE #1 (by writer James Robinson and penciller Philip Tan) hits stands Wednesday, July 4.