We are all china barely mended,
clumsily glued together
just waiting
for the hot water and lemon
to seep through our seams. 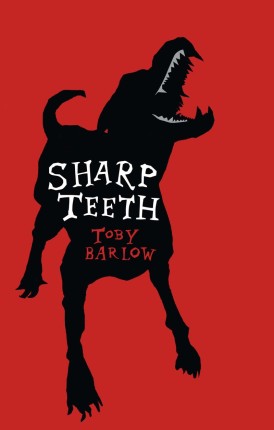 I’ve never been the biggest fan of poetry. I think it’s beautiful, but I’m not a big reader of it, and I don’t write it. Sharp Teeth is that wonderful exception.

Written in free verse, Toby Barlow’s debut novel combines the mysteries, passion, and eloquence of poetry with the accessible storytelling of prose. The Wall Street Journal likened it to “Romeo and Juliet, werewolf-style,” which is partly accurate. The different lycanthrope packs of Los Angeles are like the familial houses that rule the city, the members brothers and sisters, bound by the magic in their blood and the secrets of their transformation. Between them are a pair of unlikely, star-crossed lovers: the dogcatcher and the wolf. Only he doesn’t know what she is, and that ignorance rubs against her bottled-up knowledge and heats the friction between them.

There’s tragedy, like with Romeo and Juliet, though not all is lost. The book is part modern crime drama. A cop named Peabody investigates a murder: the evidence a river of blood and the unmistakable trail of red paw prints that leads him into the heart of gang rivalries that are only human some of the time. An old pack, a wild pack, and a rebel pack. All three with different outlooks on life but one insatiable hunger to own the town, to devour it.

These werewolves don’t change by the cycle of the moon: “That’s as ancient and ignorant as any myth.” Rather:

The blood just quickens with a thought
a discipline develops
so that one can self-ignite
reshaping form, becoming something rather more canine
still conscious, a little hungrier.
It’s a raw muscular power,
a rich sexual energy
and the food tastes a whole lot better.

That’s Sharp Teeth in a nutshell. These people have reasons for turning wolf. They were recruited because of their strength and loneliness, the sense that the world had wronged them, abandoned them, and now is the time to rip its throat out. That desire turns to blood lust, as primal as the sexual drive that burns with it. Sex and love. Canine and human. Almost one and the same, and the beauty is how they flirt and intermingle, that violence and passion spilling out like guts on the page.

It’s a dog’s world. Barlow ponders the tameness of man’s best friend as much as he does the wolves those mutts might be as they wait and watch with knowing, human eyes. Blending in as regular dogs is how these packs stalk the town, how they get away with murder, how they infiltrate the enemy’s forces and convert and initiate or betray. They operate by animal rules and live by human needs for revenge and companionship and possession. Barlow weaves these two sides together with grace and sadness and a just a lick of happy-ever-after.

You’ll never look at your dog the same way again.