Happy Friday, everyone! This week’s awesome book cover is coming to you a little later in the day. I’ve been sick with a cold, so I’ve been getting to things a little slower than usual. But I hope you’ve enjoyed this week’s special guest. I enjoyed having Marta on the blog.

Today’s pick is Wide Open by Deborah Coates. It came out earlier this year. 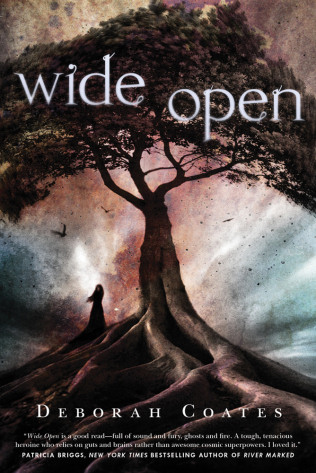 When Sergeant Hallie Michaels comes back to South Dakota from Afghanistan on ten days’ compassionate leave, her sister Dell’s ghost is waiting at the airport to greet her.

The sheriff says that Dell’s death was suicide, but Hallie doesn’t believe it. Something happened or Dell’s ghost wouldn’t still be hanging around. Friends and family, mourning Dell’s loss, think Hallie’s letting her grief interfere with her judgment.

The one person who seems willing to listen is the deputy sheriff, Boyd Davies, who shows up everywhere and helps when he doesn’t have to.

As Hallie asks more questions, she attracts new ghosts, women who disappeared without a trace.  Soon, someone’s trying to beat her up, burn down her father’s ranch, and stop her investigation.

Hallie’s going to need Boyd, her friends, and all the ghosts she can find to defeat an enemy who has an unimaginable ancient power at his command.

Well, what do you think of the cover? It’s kind of ominous, right? It reminds me of this.

She released Charles’ grip and the bloody tree vanished, in its place only the shadows of two young people who’d just shaken hands.

As far as I can tell, there’s been a decent amount of positive press for The Darkening Dream. Author Andy Gavin co-created the video game company Naughty Dog, and considering the minimal narrative template of games like Crash Bandicoot (and even the more story-driven Jak & Daxter), the transition between mediums must have taken work. Unfortunately, Gavin moves into troubled territory.

Pinning down exactly why I didn’t like The Darkening Dream wasn’t easy, but I knew something was off from the first few chapters. For a book set in the early 20th century, it doesn’t always show its age. Maybe it’s because the year 1913 wasn’t too long ago, but I had a hard time picturing old-fashioned young women running around an amusement park with men and then, scenes later, concealing their ankles and elbows with layers of clothing. And after that, frolicking in cosplay outfits.

This initial confusion as to the time period Gavin is portraying did wear off, but other problems ensued. I liked the author’s use of imagery (especially the bloody sycamore) and his demons, like the central vampire character. How often do vampires turn into bats anymore? Now that’s cool.

But every time I find myself liking the characters—and I do, honestly, like them—they’re reduced through awkward sexuality worthy of a good eye roll or two. Gavin clearly wants to write “modern” women here, but he’s not entirely sure what that is. To be frank, the trouble rests with the setting of the book—these are women still bound by old society’s rules, but they’re entering a world that’s more accepting of them. So at the same time Gavin is following outdated social standards in order to establish the times, he’s also trying to break free of them. For example, today’s age allows women to be more sexually free and active, but the events of the book still push the old idea: Women who openly engage in sexual acts are wicked (or, in some cases, in need of a good exorcism), while those who resist temptation are good. I don’t think Gavin is communicating that intentionally, but that’s what the prose is pushing.

Okay, here’s where things might get a little TMI, so read or skip this paragraph at your leisure—Gavin gets points for addressing menstrual cycles. Yes, you read that correctly. I completely believe his descriptions, too (down to the spot on the mattress, if you know what I mean), except for one crucial detail he leaves out every single time: When a woman stains her undergarments because of her period, she’s not just going to strip and be done with it—especially not women in the early 20th century, when Wal-Mart doesn’t exist in little old Salem. She’s going to wash her sheets and panties with soap and cold water. It was baffling to me that Gavin went to such lengths to realistically portray a monthly “accident” but never bothered to think the situation through to the end. Duh, you wash the thing! Ironically enough, these scenes always lead the character to the bathroom, where she wishes for hot water to clean herself off—but, of course, not cold water for a good soaking. /TMI

Another big issue for me was the overwhelming amount of sexual friskiness involved. Yes, I get that most of these characters are in their teens, and sex is on their minds even in the midst of demon-hunting and vampire-slaying, but Gavin can’t help but insert some perversion into nearly every scene. Not to mention he uses embarrassingly archaic phrases, like the “dark triangle” between a woman’s legs. I’m giggling right now, and not because it’s dirty—because it’s older than dust.

The pacing could use a little work toward the end of the book. Gavin rushes the story post-killing victory (you’ll know which one), and not much attention is paid to the remaining villains—especially not the Big Guy. Did I miss something? Is there supposed to be a sequel? Because it certainly feels like it should be, but apparently not. As a result, the ending resembles one big Hollywood “boo!” ending—you know the kind, where oh, they killed the zombies, but now there’s one more! Surprise! [Update: Yes, Gavin has confirmed a sequel. See the comments.]

Perhaps I sound a little bitter, but I was looking forward to The Darkening Dream with great enthusiasm. I love Gavin’s work in video games. In writing, he could use some guidance. But it’s not a bad first novel, all things considered. Just not one with enough foresight.

Okay! After I tackle another book for Kirkus Indie (sorry, can’t share the details), I’ll be back with a review of a nice, thick book that should appeal to Joss Whedon fans. Thanks for reading!