This week’s great book cover is for A House in the Sky: A Memoir by Amanda Lindhout and Sara Corbett. 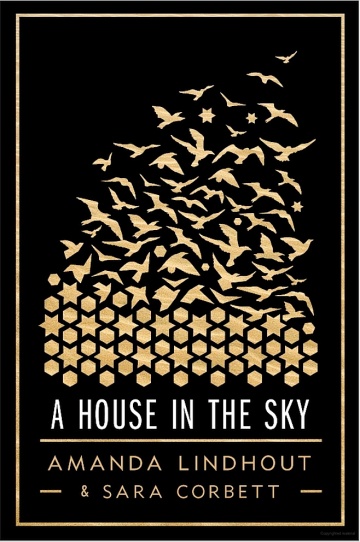 I love this cover. It’s minimalistic yet elegant, and it reminds me of a wood cutout.

The memoir is about a brave woman whose love of traveling leads her to Somalia, “the most dangerous place on earth,” where she’s abducted on her fourth day and held hostage for over a year. She “converts to Islam as a survival tactic, receives ‘wife lessons’ from one of her captors, and risks a daring escape,” according to the description.

It sounds good albeit upsetting.

This week’s book cover selection is the memoir The Girl Who Fell to Earth by Sophia Al-Maria.

When Sophia Al-Maria’s mother sends her away from rainy Washington State to stay with her husband’s desert-dwelling Bedouin family in Qatar, she intends it to be a sort of teenage cultural boot camp. What her mother doesn’t know is that there are some things about growing up that are universal. In Qatar, Sophia is faced with a new world she’d only imagined as a child. She sets out to find her freedom, even in the most unlikely of places.

Both family saga and coming-of-age story, The Girl Who Fell to Earth takes readers from the green valleys of the Pacific Northwest to the dunes of the Arabian Gulf and on to the sprawling chaos of Cairo. Struggling to adapt to her nomadic lifestyle, Sophia is haunted by the feeling that she is perpetually in exile: hovering somewhere between two families, two cultures, and two worlds. She must make a place for herself — a complex journey that includes finding young love in the Arabian Gulf, rebellion in Cairo, and, finally, self-discovery in the mountains of Sinai.

Have a great weekend, everyone! Any special reading plans? I finished The Fault in Our Stars last night, so expect a review from me soon.

Theo Pauline Nestor took to the Huffington Post yesterday to talk about her experience creating How to Sleep Alone in a King-Size Bed: A Memoir of Starting Over. Apparently, everybody thinks writing a memoir must be “therapeutic.” Her reaction was to cringe.

“I cringed because I see the book as a story that I had worked long hours to craft and shape,” she wrote. “I see writing as something I love, but it’s also my job. When I think of ‘therapeutic writing,’ I picture long scrawled journal pages of unfiltered, uncensored feelings. When the word therapeutic is used in reference to my work, I feel a smidge patronized. Why don’t you just pat me on the head while you’re at it?”

Nestor admits that she understands where these people — her readers — are coming from when they use the word she so loathes. They’re only trying to connect with her and learn more about the writing process and its inherent rewards. Penning the memoir did bring Nestor joy, but not because it’s therapeutic (although early portions of the book were) or because publishing is some big miracle cure.

The answer came to her after watching a 20-minute TED talk about “The Power of Vulnerability.” It’s all about how opening ourselves to others — becoming vulnerable and revealing our authentic selves — increases happiness.

“To write a full-length memoir, you have to share plenty of stuff that you’d just as soon keep out of public view,” she wrote. “There are many reasons to avoid this, and many writers are out there avoiding it right now. It’s scary to write about your own experiences and share a hunk of the real you with people you’ve never met (and — even worse — with people you have met), but writing and specifically publishing a memoir has brought me an increased connection to others.”

I find this painfully true for the same reason that joining social media can either bring people together (through reconnecting, sharing life events or daily thoughts, and having a voice in a “community”) or make them lonelier than they were when they signed on — look at all these people who you could be spending time with while you’re here, alone, sitting behind a computer screen. These sites are only supportive if you have someone to talk to; otherwise, it’s just like staying quiet in a mingling crowd.

The same risk/reward is involved in forming relationships in face-to-face social situations. Do you dare let others in, or are you too shy to be “vulnerable”?

Nestor objects to the word “therapeutic” because it’s too wild to describe what the writing process is like (authoring a memoir is not like keeping a diary), but she asserts that establishing connections with other people is what helped her find happiness. So my question is, is writing in a way that enables you to communicate with others a “therapeutic” act in itself? What do you think is key to successful catharsis in writing?

Today’s pick is 8: All True: Unbelievable, a memoir by Amy Fusselman about childhood, marriage, and motherhood.

I think the cover is soft and elegant. What about you?

This one speaks for itself. My Education: A Book of Dreams by William S. Burroughs was published in 1995, two years before the author’s passing.

Description of the book as listed on Amazon (from Library Journal):

Similar in format to Jack Kerouac’s Book of Dreams (1961), Burroughs’s latest offering is a simple dream diary, interspersed with brief interpretive comments and presented in clear, accessible prose. Most of the dreams involve visits to the Land of the Dead, where nearly all of Burroughs’s friends and enemies have long since vanished. Kerouac, Brion Gysin, Jean Genet, and hostile critic Anatole Broyard make frequent appearances, along with the author’s parents; his wife, Joan; and his son, Billy. Burroughs himself has mellowed considerably. He avoids sex, deplores thievery, rails against gun fanatics, and shares his home with several pampered cats. Because the author’s best work incorporates nightmares and hallucinations, his dream record is of genuine literary interest. However, readers unschooled in Beat lore will struggle with cryptic allusions to obscure people and events. This important work for fans will likely win few new converts. Recommended for larger fiction collections.