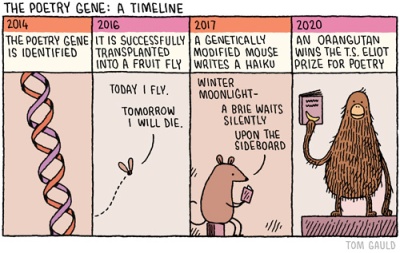 So you’re a high school student. At that time in your life, maybe you’re writing poetry about lots of darkness and death, or maybe you’re a football player who gives little thought to anything inside the classroom.

Or, okay — let’s ditch the stereotypes. Say you’re a football player who writes a poem with actual emotion behind it. That’s more than a lot of people can do when they’re being forced to churn out a poem for a grade. To the untrained, creativity — writing — isn’t something that can be done on command, without the spark of inspiration.

But one high school football player from Rittman, Ohio actually channeled his thoughts and feelings (in this case, frustration) into his poetry assignment — and he got punished for it. The 16-year-old Nick Andre wrote about his team’s losing season and how the star wide receiver gets more perks than he should because he’s the coach’s son and quarterback’s friend. Andre titled his poem “Stupid.”

The school called it “hazing” and “harassment,” suspended him for four days, and made him sit out the last two games of the season.

Andre’s response is actually smart, which isn’t surprising considering what he did with his poem. “Who am I harassing or hazing?” he told local news. “I mean, I didn’t state any names.

“It’s like wow, just over doing my school work, I get in trouble, get thrown off the football team, you know get suspended for four days, which could potentially really mess up my grades” (emphasis mine).

So this is how schools kill creativity — by misinterpreting it as misbehavior. It’s like the kid in the back of the class who draws nasty pictures of his teacher, but the art is really, really good. Should that be confiscated and discouraged, or should the teacher make an exception? The difference to a future could be huge.

God forbid a kid write a poem and like it.