With the debate over gay marriage raging in the news lately, Prophet of Bones (out tomorrow) fits right in.

OK, so this new book isn’t about homosexuality. At all. But it is about a coming together of religion and science, which is the kind of open-mindedness we need to be more receptive to. In other words, you could believe this and I could believe that, and it would be ALL RIGHT. The world wouldn’t end.

Prophet of Bones by Ted Kosmatka — who, as it happens, is a very talented writer at video game company Valve (and if you’re not a gamer, please don’t let that affiliation negatively sway your decision to read this book) — isn’t about a doomsday event, either. But it is about the creation of Earth and answering crazy questions like, what if God made two Adams?, and, what if Darwin is totally wrong and we’re all the product of intelligent design?

Basically, it’s about a scientist’s discovery of a divergent human species — one that came into existence at the same time as our ancestors but isn’t a part of the same family tree. Their very bones reveal the truth that God was, well, playing “god” with his favorite creatures: mankind.

END_OF_DOCUMENT_TOKEN_TO_BE_REPLACED

**You should all check out my current giveaway for a free book — you have until December 20 to enter! Good luck!**

“God,” Eldritch said, “promises eternal life. I can do better; I can deliver it.” 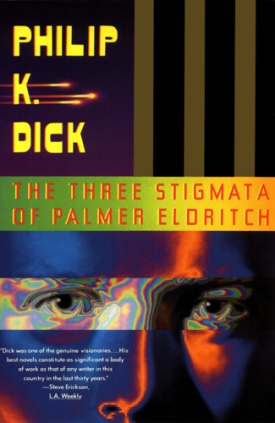 When I finished my boyfriend’s favorite Philip K. Dick book last week, I had no idea what to say. That’s probably a sign that I’m not crazy about it, but I generally do like the novel. I’m just not sure what to take away from it.

You know the feeling. We’ve all been there. To me, The Three Stigmata of Palmer Eldritch (1965) wasn’t transmitting a profound galactic message from the future here to Earth as much as it was pondering what’s out there and who’s watching over us. If we sent someone out into the depths of space, like the book did Palmer Eldritch, what would he tell us if he returned?

No one quite knows what Eldritch has seen, but he comes back to Earth (or Terra) … different. At this point, people are probably pretty weird to him, too — most of the world is chewing what’s called Can-D, an illegal drug that “translates” you into a communal plane of being. It’s like getting high and imagining you’re a doll, only all the women go into one body (Perky Pat’s is the most popular), and all the men into another, and you forget about your crummy life for a while. The comedown afterward is what makes users so desperate for more, especially those living out their lives in exile on the Martian colonies. People are depressed and bored.

END_OF_DOCUMENT_TOKEN_TO_BE_REPLACED

Life of Pi* is not a difficult book. Author Yann Martel and publisher Knopf Canada released it in 2001, so it’s not even that old. But its literary merits are precious — truly a wonder of our time. This is a novel you can recommend to family and friends with full faith.

And that’s what it’s about: faith. Not necessarily religious faith although that does hold great meaning for Pi Patel, the shipwreck survivor after whom the book is named. It’s also about faith in life and where it takes you. What seem like acts of god may steer us off the course we hope and plan for ourselves, and we’re then bound to where the waters carry us. We can either succumb to hardship or make it a part of our souls and live on.