December is almost here, and that means it’s time to shop like it’s nobody’s business — and groan at all the prices.

This top 10 list contains items that range from the ridiculously affordable to the slightly pricey, but it’ll cover all the readers on your gift list this year. So whether you and books are strangers or total best friends, your life this next month is about to get a whole lot easier.

END_OF_DOCUMENT_TOKEN_TO_BE_REPLACED

This Friday’s pick is The House That Stood Still, a science fiction book published in 1960 and written by American author A. E. van Vogt.

Vintage covers are the best. What do you think?

Die Anderen, which translates from German to The Sea People, was written by Adam Lukens and published in 1959. My research dug up some interesting trivia about Lukens. According to the Feminist SFF & Utopia website, Adam was a she—Diane Detzer, to be exact, who was born on May 13, 1930, and used the pseudonyms “Adam Lukens” and “Jorge De Reyna.”

She was difficult to trace, but I did manage to find a short list of her works. Whether this is a complete bibliography is uncertain:

Not a big surprise to me, since women often resorted to male pseudonyms in order to get published, and women especially weren’t supposed to write sci-fi. 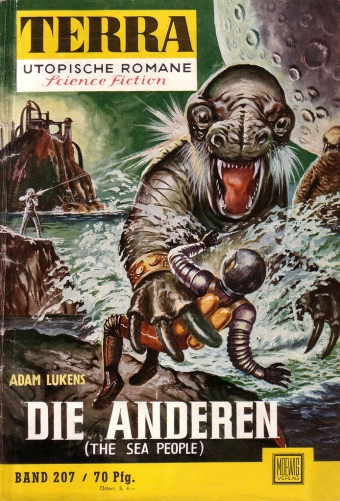 Thanks to Cassie for linking to a whole host of awesome German vintage science fiction covers.

Aidan is so big now 😭🥰 #babyboy #almost16monthsold #kids #family
Christmas plants, festive animals, glass art ... and family selfies. 😅 #phippsconservatory #christmas #merryandbright #winter #holiday #plants
Thank you @jessicagesler @isleofyousalon ! 💇‍♀️ Love the new 'do
I love both these boys so much. ❤ Aidan has always adored our cat Sammy, even at just a couple months. I remember one morning lying in bed where Sammy came up real close and sniffed him, and Aidan got the biggest smile on his face. 🥰 Tbh Sammy is the #1 sweetest, most loveable cat on the planet. He has three feet, a tiny baby meow, loves food, and is afraid of blankets and socks. 😂🧦🐈 #cats #babies #family #pets #animalfriends #12monthsold #besties #catstagram #babyboy #kids
Weekend with my fam ❤ Walks and goats and sheep and piggies and punpkins too 🍂🎃 Also new hair! 💇‍♀️ #applefestival #fallishere #fallbaby #pumpkins #goats #piggies #babies #weekends
Thanks to everyone who came out to celebrate Aidan's first birthday with us! We're super lucky to have such wonderful people in his life who love him and are kind to him. You made the day super special! 🎈❤💙💛💚🎈 #firstbirthday #babies #cuteness #oneyearold #timeflies #fallbaby #autumn #party #cake #animalballoons #woodlandanimals #animaltheme